BECAUSE QUEER PEOPLE DESERVE HAPPILY EVER AFTER, TOO. 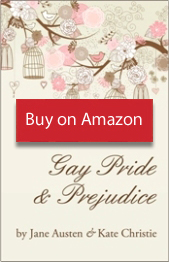 For the Bennet sisters, life in quiet Hertfordshire County is about to change. Netherfield Hall has just been let to a single man of large fortune. But while it is true that such a man is generally considered to be in want of a wife, it is equally true that not all men desire female companionship, just as not every woman dreams of being married.

Like other variations on Jane Austen’s classic romance novel, Gay Pride & Prejudice poses a question: What if some among Austen’s characters preferred the company of their own sex? In this queer revision of the classic original, Kate Christie offers an alternate version of love, friendship, and marriage for Elizabeth Bennet, Mr. Darcy, and others among their circle of friends. But even as the path to love veers from the straight and narrow, the destination remains much the same.

If you have an open mind, dear reader, you may discover the book Jane Austen would likely never have approved, but which, nonetheless, affords a window onto gay and lesbian life in early nineteenth-century England.

Gay Pride & Prejudice is available in Kindle and paperback formats from Amazon. You can also purchase it in a variety of eBook formats (including ePub, PDF, and Kindle) from Bella Books and in paperback and Nook format from Barnes & Noble.

Reviews and Reader Comments for Gay Pride and Prejudice