Patience and Sandals: The Advantages of Middle Age

This morning dawned bright, gorgeous, and just a little bit chilly. Perfect sleeping weather, but when it came time to leave for work, I found myself facing a dilemma familiar to residents of the Pacific Northwest: Should I wear shoes to keep my toes warm during the morning commute, or sandals to keep my feet cool in my south-facing, un-air-conditioned office? Decisions, decisions… 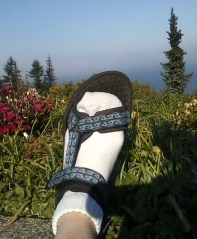 So I did what many PNWers do: I compromised and pulled on warm socks followed by—drum roll—my Teva sandals. That’s right, I was going to rock the socks and sandals look until the sun could get its groove fully on.

Now, admittedly, this might have been a more attractive (not to mention, subtle) solution if I weren’t wearing capri pants, thereby leaving several inches of bare shin above my sock line. But at my age, comfort wins over vanity. Anyway, it wasn’t like I was planning to wear the combo for long. By noon or so, my office is usually nice and toasty.

As I prepared to leave the house, I intercepted a look from Kris, who was reading Alex a pre-breakfast story. I held up a hand to forestall what I knew was coming. See, my lovely wife is the queen of two things: sarcasm and back-handed compliments. Together they pack a punch even more powerful than the feared socks and sandals combo.

“Don’t say anything,” I warned.

“It’s the Pacific Northwest,” I said, as if she had been living someplace else the past seven years. “Everyone wears socks with Tevas.”

“I know that. And anyway, you are a forty-something lesbian, after all,” she added helpfully.

Even without her morning coffee, my wife—who, incidentally, will breach the forty-plus barrier herself in eight measly months—can pack a zinger. I wouldn’t say my face fell at this accurate yet somehow depressing statement; more like it crumpled into a bitter pout accompanied by a keening moan.

“Oh no she didn’t,” Alex whooped. Or maybe, actually, it was me who said that.

Either way, yes she did; and so, as I exited the house, there were kisses for Alex and Maggie and Corona, but only a grudging pat on the head for Kris paired with a perfectly audible under-the-breath grumble about the nerve of some younger women.

Apparently, I decided during my twenty-minute drive to campus, my wife’s teasing comment had touched a nerve. Since becoming a mother at age thirty-nine and entering my forties only a few short months later, my conception of myself has changed fairly dramatically. Middle age isn’t quite what I expected. Instead of being at the peak of an exciting career, I’m lucky in this economy to have a part-time day job that provides terrific benefits for my family and allows me extra time with my daughter. My writing career has only just begun to take off with the release of my first novel less than a year before Alex’s birth, and at this point, with my current sales in the lesbian fiction niche, I won’t be quitting my day job anytime soon. 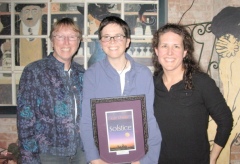 Celebrating Solstice with Kris and my mom

And yet, amazingly, I reached my goal of publishing a novel before the age of forty. In fact, I’ve published four novels to date, and in less than two weeks, on my forty-first birthday, I will release my fifth novel and second indie title, Family Jewels. I’m in the final editing stages right now—which is probably why I’m writing this blog post; procrastination is, after all, the writer’s best friend—and I’m really excited about it. Though it sounds like a cliche, I genuinely feel like this is the best novel I’ve written to date, and I can’t wait to get it out there so that I can turn my attention back to the novel I temporarily set aside after Alex was born, Patron Saints.

I can’t say I’m entirely surprised that I’m finally producing what feels like good, solid work. When it comes to writing, middle age offers a kind of professional advantage. Not to take anything away from my earlier work (or anyone else’s, for that matter), but there’s a reason I’ve long believed I probably wouldn’t be a “real” writer until I amassed some life experience that included plentiful reading and writing.

This isn’t necessarily true for everyone. One of my favorite novels, Frankenstein, was written by Mary Shelley when she was only twenty-one. Then again, in writer circles, Shelley is regarded as an unusually (and annoyingly) youthful prodigy.

The non-literarily inclined don’t necessarily share this perspective. Shortly after my college graduation, for example, my father asked me how I planned to become the writer I’d always claimed to want to be.

“Why would you want to wait so long?”

“It’s not what I want, Dad. I just haven’t lived enough yet to be a writer.”

At twenty-one I wasn’t able to fully articulate the sense I had then of my eventual (I hoped) maturity, both as a person and as a writer. I’m not talking mechanics, here. Even as a kid I was able to string words together into coherent sentences and decent-looking paragraphs. But when I pondered character and theme and plot points, I floundered. That’s why my early novels tended to feature twenty-something tomboy jocks working toward an authentic lesbian identity. For a while, writing what I knew meant working with a fairly limited fictional palette. 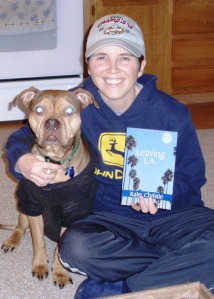 Twenty years on, I’ve lived a little more than I had as a newly minted college graduate. Marriage and motherhood, graduate school and multiple careers, and cohabitation with two different partners on both coasts of the country have all exposed me to a wide variety of experiences—and people. Kris is always warning our friends and family to be careful what they say because they might recognize parts of themselves, or at least their words, in my next novel.

And that’s exactly right. I steal from the world around me in order to garnish my fictional worlds with bits of realism. At forty, I hope I’ve collected enough garnish to make for more interesting word salads than the ones I came up with at twenty-one.

Last week Kris and I took Alex to Michigan to vacation briefly with both sides of the family. My mom and I were in the kitchen one night talking about history—personal, political, familial—when she said, “We thought we were changing the world, but we were only changing a decade.”

I smiled and said, “I’m totally going to use that in my novel.”

Sure enough, the latest revision of Family Jewels contains nearly that exact sentence in a bit of dialogue. I’m not too proud to steal from—I mean, to learn from the people who reached middle age before me. Or the ones who’ll come after, either. (That means you, Alex.)

Nor am I too proud, apparently, to wear socks with sandals to my job at the local university. This week, anyway. Next week after all the students return and classes start up again, I’ll probably wear tennis shoes to work.

Now if I can just convince Kris to refrain from commenting on middle-aged women who wear running shoes with dress pants… At least I’m not as bad as this guy, right?

9 Responses to Patience and Sandals: The Advantages of Middle Age