When you’re with someone long enough, you become well acquainted with their pet peeves. So it shouldn’t be a surprise that twelve and a half years in, Kris knows that I get all twitchy when people write, “try and do something” instead of the grammatically correct “try to do something.” Or that I wince when people say “less” when they should say “fewer.” (Note that my pet peeves mostly have to do with grammar. Shocking, isn’t it?)

On the flip side, I know that Kris cringes at displays of the type of social awkwardness celebrated in Ben Stiller’s films and the American Pie series. I also know that she’s not a fan of people talking about themselves in the third person. Which is why for years, I used to say things to her like, “Kate loves Kris,” always in an unidentifiable accent to make the statement even more irritating. Because, after all, what are wives for?

A few years ago, Ellen Degeneres offered some thoughts on the propensity to speak in third person:

I have to agree with Ellen that while this behavior is cute in Elmo, one of the best-known purveyors of third person self-talk (and one of Alex’s heroes), it is decidedly less so in adults.

Which is why it’s a little disturbing that I’ve started referring to myself in the third person—completely unintentionally, and with no amusing [sic] accent. For example, last week while Alex was taking a nap, I thought to myself, “Mimi needs to pee.” Now, this statement is significant on multiple levels: (1) I called myself “Mimi,” which means that I view myself as Alex’s mother even when she isn’t present; (2), I had to tell myself to take a bathroom break, a sign that either I am too overloaded to recognize my own bodily needs or that we’ve recently strapped ourselves onto the potty training roller coaster, or both; and (3) or C as Kris would say, my syntax resembled that of a two-year-old rather than an almost forty-two-year-old.

The funny thing is, I’m not the only one at home shaping my sentences this way. In recent weeks I’ve caught Kris saying things to Alex like, “If you want to go for a walk, Mama needs you to put your socks on.” Or, “Can you help Mama push the laundry basket down the hall?” What’s more, Kris utters these borderline sacrilegious sentences without even wincing.

Why have we allowed our ban on third person self-talk to fall by the wayside? Because language acquisition, as it turns out, is freaking hard. 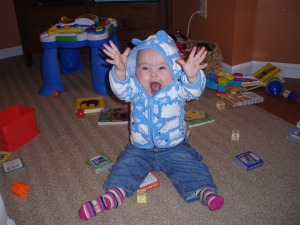 Among the most difficult so far for Alex appears to be learning the distinction among and between subject pronouns (I, you, she, he, it, we, they) and object pronouns (me, you, her, him, it, us, them). “Mimi pick you up,” is one of our daughter’s more endearing manifestations of pronoun confusion, usually accompanied by insistent gesturing with uplifted arms. In this case, her non-verbal signing gives context to her pronoun error and ensures that her message is received.

Last month, I called Kris on her lapsed pet peeve, and we spoke at length about the way our language patterns have shifted. Mostly, we ascribe to the theory that Alex will learn best by hearing us speak to her as we would talk with other adult native English speakers. But sometimes we modify that approach in the name of expediency, like when we need to get something done or have a statement be immediately understood.

“I totally get it now why parents talk about themselves in the third person,” Kris said, and I had to nod in agreement. Just another previously held belief/ thought system demolished by parenthood. Or perhaps by Elmo—jury’s still out on that one.

The shift is only temporary, of course, as seem to be most things relating to parenting and childhood. Teething, sleep disturbances, growing pains, pronoun confusion—these things are like the weather: Wait long enough, and they’ll change. In Alex’s case, her language acquisition is only beginning.

And if the pronoun thing doesn’t take? Well, we can always fall back on Youtube:

Parenthood has impacted my pet peeves a bit, too. Now on occasion Kris actually (gleefully?) catches me using “less” and “fewer” incorrectly. Not because I don’t know the difference, but because sometimes I’m too sleep-deprived and distracted to speak coherently.

Still, I’m pretty sure it would take more than two years of semi-sleepless nights for me to slip up and say “try and do something.” Then again, with the twins on the way, I guess we’ll see…

I'm a lesbian fiction author currently residing in the Pacific Northwest. To read excerpts and more of my novels, visit www.katejchristie.com.
View all posts by Kate Christie →
This entry was posted in Family, Non-Biological Motherhood, Parenting, Writing and tagged language acquisition, pronouns. Bookmark the permalink.