Gaydar, Straitdar, and Fighting the Right 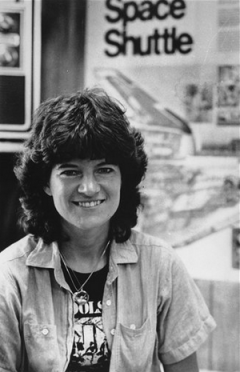 Yesterday morning, I opened my email to learn that Sally Ride, the first U.S. woman to fly in space (1983, aboard the Challenger), had died of pancreatic cancer at age 61. Like most people, I also learned from her obituary that Ride, who inspired me as a teenager to consider a career as a physicist and astronaut, was survived by Tam O’Shaughnessy, her partner of 27 years. Sally Ride, it turns out, was gay.

Later, while Alex napped, I read online about Sally Ride’s life since leaving NASA, and about her partner, Tam, a fellow one-time professor who helped create Sally Ride Science (www.sallyridescience.com), a company that holds science festivals for middle-school students with the aim of interesting girls in future scientific careers. As I finished one of the articles, I made the mistake of reading a few of the comments at the bottom of the page.

I know, I should never read online article comments. It only infuriates me, and half the time the comments are made by middle school kids trying to get a reaction—amazing how talented some pre-teens are at that sort of manipulation. But my eye just sort of drifted, and at first I was pleasantly surprised as, for the most part, the comments were respectful of both women. The first one that struck me negatively was in the vein of, “What a great American role model. Why does her sexuality have to come into it?”

Um, duh, because she just died, and if she were straight, any news coverage would reference her grieving husband who had stayed by her side throughout her battle with cancer, too. Besides, as another commenter pointed out, Tam will be denied any federal benefits that the straight spouse of a former U.S. astronaut would normally earn: Social Security payments, a government pension, and everything else the U.S. government gives to the straight spouses of former government employees, including official recognition.

The next less-than-notable comment was also predictable: “Finally, a great gay American who didn’t feel the need to flaunt her homosexuality.”

Whenever I read or hear comments like this from straight people—the combination of the verb “to flaunt” with the noun “homosexuality” is usually a pretty accurate indicator of heterosexuality—I can’t help but roll my eyes. Puh-lease. Join the twenty-first century sometime, will you? Gays “flaunt” being gay the same way African-Americans “flaunted” their race during the Black Civil Rights movement—in order to call attention to the multitude of ways we are still attacked and denigrated by our government and fellow citizens, and to refuse the invisibility to which some people would like to relegate us. Again, duh.

But the comment that really caught my attention was made in response to another comment. The first writer took a swipe at the predominantly Republican Religious Right’s demonization of LGBT people, a bit off-topic but not unfounded, in my opinion. However, another commenter disagreed: 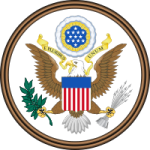 “Why the need to attack the Religious Right? I am a member of that group, and as a political conservative, I believe the government should stay out of our citizens’ private lives. And if the Democrats really cared about gay issues, Obama would have passed pro-gay rights legislation between 2008-10, when Democrats controlled everything. P.S.: Just who was President when DOMA was signed into law?”

<Sigh.> Okay, let’s take a moment to parse this statement and all of its unspoken assumptions and assertions, one unreasonable line at a time:

1. “Obama and Congress could have fixed DOMA if they wanted.”

Perhaps—assuming the President and every member of Congress was willing to test the veracity of the urban legend that states that if a political leader helps out the gays, he or she will not be re-elected because the nation’s infuriated homophobes will rise up, en masse, and vote them out. That assertion also conveniently overlooks the reality that Obama and Congress were dealing with during 2008-10—i.e., the economic disaster left in the wake of George W. Bush and his all-Republican Congress. I’m pretty sure that urban legend would have come to pass had Congress and Obama taken the time to attempt a recall on DOMA, which is already headed to the Supreme Court for its unconstitutional comeuppance (fingers crossed), rather than spending time and effort on trying to dig the country out of economic ruin.

2. “Clinton was President when DOMA was signed into law; therefore Clinton and all Democrats are to blame for DOMA.”

Are you a moron, or do you just play one online? The Republican-controlled House and Senate drew up DOMA and held it over the President’s head; Clinton’s main failing was his inability to come up with a politically expedient method of resistance, a failure for which, along with Don’t Ask Don’t Tell, he has expressed his regret on many occasions. As he remarked in 2009, “We were attempting at the time, in a very reactionary Congress, to head off an attempt to send a [federal] constitutional amendment banning gay marriage to the states.” DOMA was the unfortunate compromise.

Oh yeah? Well, I am an American lesbian who is not a practicing Christian, so it is clearly safe to assume that American gays do not practice Christianity. In fact, to state otherwise is to insult gay people everywhere…. Yeah, I didn’t think so.

The thing is, it’s a fact that the Christian Right doesn’t like gay people, especially those of us who flau—I mean, demand equal treatment and recognition of our relationships and families. For anyone who thinks I’m wrong and the numbskull commenter above is right (no pun intended), there is, fortunately, a respected think tank that has my back. Political Research Associates (PRA), a progressive organization that keeps a close eye on the political machinations of the Christian Right, recently issued a report that states, “[C]onservative Christians are still the mainstay of the anti-LGBT movement.” So, dumb Internet commenter, that’s why liberals tend to vilify the Religious Right—because y’all tend to act rather villainous, turns out. 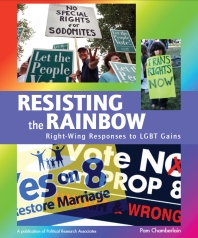 Massachusetts-based PRA says they focus their watchdog efforts on the Christian Right for the following reasons: “While attacks on civil liberties can come from any direction, the political and Christian Right use skillful marketing that exploits the public’s desire for quick solutions and capitalizes on today’s hectic information flow. With clever slogans that oversimplify complex public policy issues, the Right routinely scapegoats others in pursuit of their agenda.” In fact, PRA’s most recent research report  finds that homophobia remains an incredibly successful tool in mobilizing political support for right-wing causes that may or may not have anything to do with actual gay people.

This report, “Resisting the Rainbow: Right-Wing Responses to LGBT Gains,” is one of only a few of its kind since the National Gay and Lesbian Task Force (NGLTF)released its “Fight the Right Action Kit” in 1993. PRA’s report offers current context, case studies, profiles, and analysis of the arguments of the anti-LGBT Right. It also provides recommendations to those interested in combating the Right’s anti-gay efforts.

Some Key Findings of PRA’s “Resisting the Rainbow” Research Report

So if we queer folks are winning the battle, then why worry about the Christian Right’s anti-LGBT efforts? Here’s one reason: On Saturday night, an out lesbian in Lincoln, Nebraska, had her house broken into by three male attackers who carved homophobic slurs into her skin and set her house on fire. She managed to escape with her life, and the local police and FBI are now investigating the incident as a hate crime. In addition to carvings, the perpetrators reportedly spray-painted threatening anti-gay messages on her basement walls, including “Stay away from children.” Authorities believe the attackers targeted their victim because she recently started volunteering with children at a local non-profit; her assailants apparently didn’t approve of a lesbian working with children.

Here’s another: At almost the same time, across the country in Washington D.C., out gay couple Michael Hall and Michael Roike were ambushed by a gang of men as they walked home on Saturday night. Hall’s cheekbone was shattered, and surgeons had to implant a metal plate to repair his face. Roike was also beaten, but his injuries were far less severe. Both men believe the attack was motivated by homophobia.

Hate speech leads to hate crimes. And unfortunately, the Christian Right has put a lot of energy into hating gay people—take Curtis Knapp, the Kansas-based pastor who believes the U.S. government should put gay people to death. Or evangelist Bryan Fischer in North Carolina, who claims that adoption by same-sex parents is a form of child abuse. Or Pastor Charles Worley, also from the Tar Heel state, who thinks we queers should be put into a giant pen surrounded by an electric fence, and left to die out naturally given that, according to Mr. Worley, we can’t reproduce.

Huh. I know lots of lesbians and gay men (not to mention a certain adorable toddler) who would and do disprove that ridiculous claim. Sally Ride, scientist extraordinaire and first known lesbian in space, might even have rolled her eyes at such unsound reasoning. Because of course, being queer doesn’t automatically make you reproductively challenged. It simply makes reproduction more of a challenge. But more on that topic in coming weeks.

In the meantime, in an article published today on Buzzfeed, I learned that “Bear,” Sally’s sister, identifies as gay, too. (Come on—a woman named “Bear” set off your gaydar too, didn’t it?) When asked about the people who oppose legal recognition of same-sex relationships, Bear Ride reportedly replied, “Who cares about them, really? There are those who are stubbornly ignorant, and if they want to continue in that, God bless them, but probably best not to talk to my family.”

RIP Sally Ride, and deepest condolences to Tam O’Shaughnessy, her longtime companion. May peace find you both, and may you one day meet again.

22 Responses to Gaydar, Straitdar, and Fighting the Right