As anyone who has read Solstice might guess, I am an avid fan of the WNBA, in particular of the Seattle Storm. You might not be surprised, then, to learn that last weekend Kris and I took the twins to their first (and Alex to her third) Storm game! I know, uber-lesbian-parents of us, but it was actually our straight friends Bryan and Holly who bought the VIP suite at Key Arena during a fundraiser last year. Just sayin.’

“At first we didn’t see anything we wanted to bid on,” Bryan told us. “But then we got to the Storm package. We figured this way you could bring all three kids.”

Which we did, along with two other couple friends and another friend and her three older kids. The ride into the city was a bit rough–thanks to an accident, it took three times as long to get to downtown as it usually would–but we made it in plenty of time for the start, and had the twins fed and re-diapered before the end of the first quarter, so it all worked out. A wonderful time was had by all–and we even got to see a little bit of basketball along the way! Although perhaps not as much as we were used to in our pre-child years, of course. 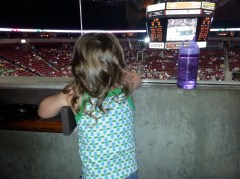 Alex appeared to have a great time playing with her friends and with the assorted gear in the suite, including a couple of rows of stadium seats under which she managed to execute an impressive army crawl. She also danced to “Move It Move It” and got to meet Doppler the mascot during the kids’ fourth quarter conga line down on the court. The Storm also generously provided backpacks with T-shirts and posters in them to each of the older kids, so the enjoyment of Saturday night’s event continued in the days after, as well. 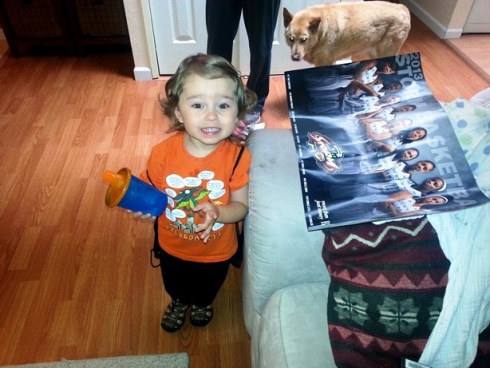 As a side note, Kris and I come by our basketball fandom naturally–Smith College was the site of the first women’s inaugural basketball championship, between the sophomores (class of 1895) and the freshmen (class of 1896). Trying to get our girls (class of 2033 and 2035, respectively) into the Smith frame of mind early! 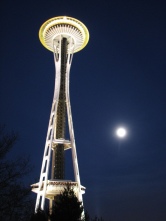 Alex’s highlight from the Seattle trip? Seeing the Space Needle and the brightly lit moon on our way out of Key Arena. But only because Sue Bird is out with an injury.

To learn more about the history of women’s basketball in America, including such rules as “no running with the ball” (!), check out the following video. Sport, history, and Smith, three of my favorite things:

A Smith First: The New Game of Basketball