Lions and Vikings and Bears, Oh My

The other day, Kris came home from Target irate. That actually doesn’t happen all that often—she’s from Minneapolis, where Target was born and still resides. (Wait, that sentence sounds as if I think a corporation could be a person…) Also, her best friend works at Target headquarters in Minneapolis, so as some of you already know, my wife’s loyalty remains staunchly with her hometown chain–despite the $150K Target donated last year to an anti-gay politician in Minnesota. (To be fair, Target is a longtime sponsor of the Twin Cities Pride Festival, so their gay rights stance is a bit schizophrenic. Or “neutral,” as their PR department would have me tell you.)

Kris’s loyalty to Target isn’t surprising to me. I have long benefited from her strong sense of fidelity, as have her beloved Minnesota Vikings, currently running dead last in the NFC North. (Sorry–as a Bears fan, I couldn’t resist.) So when she came home from Target a few days ago railing on their children’s winter clothing collection, I listened. Which isn’t to say I don’t usually listen to her rants and rails. Really.

“I was looking at hats and mittens today, and you’ll never believe the selection,” she told me as we putzed around the kitchen getting our dinner and Alex’s baby food ready.

At some point in the past few months, we have evolved from eating frozen meals separately standing up at the kitchen counter while the other person holds the baby to actually sitting down most nights at the dining room table for a family dinner, Alex strapped into her high chair—care of a Target gift card—close enough to feed but not close enough to practice her favorite magic trick: yanking the tablecloth out from under our dishes. (Needs a bit of work, to be honest.) True, we still mostly dine on frozen foods or reheated leftovers, but eating together makes a nice change.

“Good selection or bad?” I asked, filling a glass with filtered water from the fridge.

“Good if you’re a boy. There were all these cute sets with animals on them, bears and penguins and lions and dogs, but on the tag, you know what they said?”

“What?” I asked, sensing what was coming from the irritation in my wife’s voice.

“What?” I repeated dutifully.

“Hello Kitty and Minnie Mouse hats in different shades of pink. Can you believe that?”

Actually, I could. This was just more of the same in our gender-neutral baby attire woes, as readers of my previous blog post “Dispatch from the Gender-Bending Wars” might recall. Still, irritating nonetheless.

“What if you were the kind of person who didn’t want to put your daughter in something that had a boy’s tag on it?” Kris asked. “Then you would only have two choices, both pink. That hardly seems fair.”

“Especially given that there are more girls in the world than boys,” I pointed out. (Though even that is probably changing with the proliferation of sex-selective abortions in India and China, notoriously girl-negative nations.)

Alex made her usual grunting sounds of joy and took the mouthful, clenching her baby teeth (all six of them) on the spoon and refusing to let go as she slurped up the mashed peas. A good eater, our Alex. Good sleeper, too. We know—we’re lucky.

“Whatever happened to the ’70s?” I asked. “Women wrote letters to manufacturers and advertisers to protest sexist practices, and yet here we are again. It’s like the Second Wave of the women’s movement never even happened.”

“I understand that some women like pink,” Kris added, “and that’s fine. But there have to be other options for girls than just pink princess gear.”

Alex in overalls with Grandma

There are other options, of course. Kris and I choose Alex’s gender expression on a daily basis, from the toys we give her to play with to the clothes we pick for her to wear. But every time I dress her in my favorite gray onesie or her overalls with the dog or her brown bear snowsuit, none of which are “supposed” to be for a baby girl, I consider the fact that as soon as we leave the house we will likely become the recipient of commentary from strangers who have consciously or unconsciously assumed the role of cultural gender police.

In May, shortly after I wrote my first blog post on gender non-conformity and parenting, the “Genderless Baby” in Toronto made headlines. Baby Storm is being raised in a gender-neutral environment, with parents who refuse to tell anyone outside of a narrow circle the child’s biological sex in order to allow him or her to escape gender conditioning as much as possible. When the press got wind of the story, it went viral. As did the public’s wrath—articles and reader comments abounded on web sites detailing the certain trauma being inflicted on the child by its non-conformist parents. A number of child development experts also weighed in on the couple’s poor parenting skills and the problems ahead for their three children. Dr. Harold Koplewicz of the Huffington Post noted, “Teaching them that they are only safe—understood, accepted—at home is not a very character-building message.”

And yet, as one HuffPost reader commented, isn’t it the truth? As a one-time girl who preferred bikes to dress-up, jeans to dresses, blue and green to pink and yellow, I can attest to having had to fend off verbal and sometimes physical attacks for my gender non-conformity. As an adult, the same. And as the mother of an as-yet bald baby girl we sometimes dress in “boys’” clothes, I have to say I think things might just be worse now. As Kris said the other night, “It’s like there’s this tremendous backlash against anyone who doesn’t fall in line.”

The Genderless Baby incident is a perfect example of North Americans’ discomfort with gender non-conformity. According to another HuffPost article, Dr. Ken Zucker, a Toronto expert on children and gender identity, indicated that “the story has caused anxiety among people who are now wondering how they became who they are.” By reviving the nature vs. nurture debate in a controversial manner, Storm’s parents became a focal point for the anxieties of a supposedly post-feminist society that on the one hand likes to claim that equality between the sexes has been (mostly) achieved and yet on the other still dictates and closely monitors acceptable behavior, traits, and desires for both girls and boys.

Last night, my friend Josh and I decided to take Alex to a nearby sports bar to watch the Chicago Bears play the Philadelphia Eagles on Monday Night Football. I donned my retro Walter Payton jersey, purchased in 1994 for $2 from a Chicago thrift store, and dressed Alex in the Bears onesie Kris recently brought home from a local consignment shop. As Josh and I sat down at a table on the edge of the lounge area (no babies allowed in that bar), the waitress approached with menus.

“What a cute little boy,” she said, smiling down at Alex.

“Actually, she’s a girl,” I corrected her.

“That’s okay. She doesn’t exactly look like a girl, especially in this outfit,” I offered, trying to make her feel better.

“Babies should be able to wear anything,” she said. “They’re just babies.”

“Exactly,” I agreed, smiling at her.

Kris finished work and joined us a little later, and the three of us chatted and laughed and watched football and oohed and ahhed over Alex, naturally, who was happiest racing across the wood floor in her little red shoes while holding onto someone’s hands. The game was close, the company good, and Alex was in good spirits despite the relatively late evening hour (7PM). Going out definitely beat staying at home on our own, we all agreed.

But the baby’s bedtime was fast approaching, so at halftime, Kris got ready to take Alex home. Noting activity at our table, the waitress came over and asked how we wanted to split the bill. Kris and I pointed at each other and told her we would pay together. A few minutes later she returned with two bills.

As we looked them over, Josh remarked that he’d been charged for my cranberry juice. 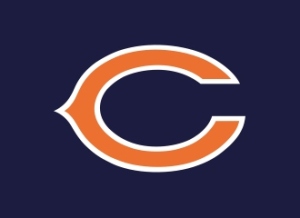 “Right. You two are together,” the waitress said, gesturing to Josh and me, “and she—” pointing at Kris “—is separate.”

“Oh, okay,” I said, not wanting to make a big deal of the error. I glanced at Josh. “I’ll just pay you back later.”

The waitress paused. “Wasn’t that right? You two are together, aren’t you?”

I hesitated. But she’d asked a direct question, and I wasn’t about to lie about who was with whom even if it would make her feel better.

“No. We’re actually together,” I said, pointing at Kris, who by this time had Alex’s car seat tucked under her arm.

“Oh,” the girl said, flustered again, looking from one of us to the other. “I’m so sorry.”

And it wasn’t a big deal. Kris left with Alex, and Josh and I moved into the baby-free bar area to watch the second half of the game. At one point I wondered if the all-male crowd noticed me with my short hair and my backwards baseball cap, but I had come in with a baby and was still sitting with a man. Probably they assumed, as had the waitress, that I enjoyed heterosexual privilege, just like—presumably—everyone else in the bar.

The Bears won (woo-hoo!) and Josh and I got caught up on each other’s lives and I went home to my wife and daughter in our little house at the edge of a big woods, and all in all it was a good night. But as I locked the front door and turned out the porch light, I couldn’t help but reflect on the rigid expectations of the outside world, the many conventions to which Kris and I have no interest in conforming. We aren’t going so far as to withhold our daughter’s biological sex from strangers or friends, but we are refusing, like many other parents, to abide by accepted rules of gender expression, a choice that no doubt would anger plenty of people–even those whose business it most decidedly is not.

Alex helping with the laundry

The truth is, most of Alex’s clothes up to now (she’ll be nine months old in a few weeks) have been given to us. We’ve purchased probably fewer than two dozen articles of clothing, many of which have been diaper accessories or socks. In addition to new clothing gifts from a variety of quarters, Kris’s brother and sister-in-law sent us hand-me-downs from their two boys while another friend’s sister mailed us a box of clothing that had belonged to her granddaughters. As a result, sometimes Alex wears frilly pink sleepers with flowers and duckies, and sometimes she wears blue and green sweatshirts with obviously more macho puppies (huh?) on them. Sometimes both items at the same time, even.

Kris and I aren’t overly concerned with the diversity of clothing options, though we both tend to prefer non-pink, non-frilly ensembles. But just because neither Kris nor I are girly girls doesn’t mean our daughter won’t be. In fact, like Alex P. Keaton’s parents on “Family Ties,” we often talk about how we could well end up with a child who is decidedly different from either of us. Either way, it’s up to our Alex to figure out who she is and what she likes (as long as she isn’t a Packers fan, of course), and it’s up to us, her parents, to love her unconditionally. Nature and nurture both have something to say about gender, but biological sex alone doesn’t–and shouldn’t–determine how we perceive ourselves and each other.

That, I think, was likely the point that Baby Storm’s parents were trying to make before their voices got lost in the hurricane of gender anxiety swirling around our twenty-first century society. 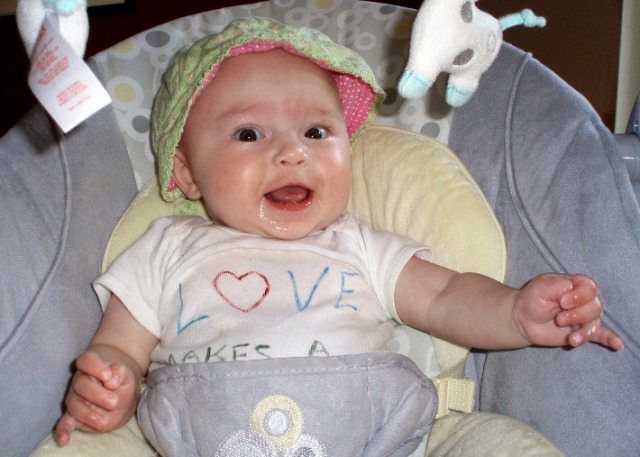